I suspect graffiti and public art may be more of a American cultural phenomenon, especially in New York City, New Jersey, Philadephia, and other urban settings.  I don’t really see it much in this part of Jiangnan, and so when I do, I always take notice and give it a good, long look. I always take pictures. For example, in Wuxi, there used to be stuff like this on a long wall. 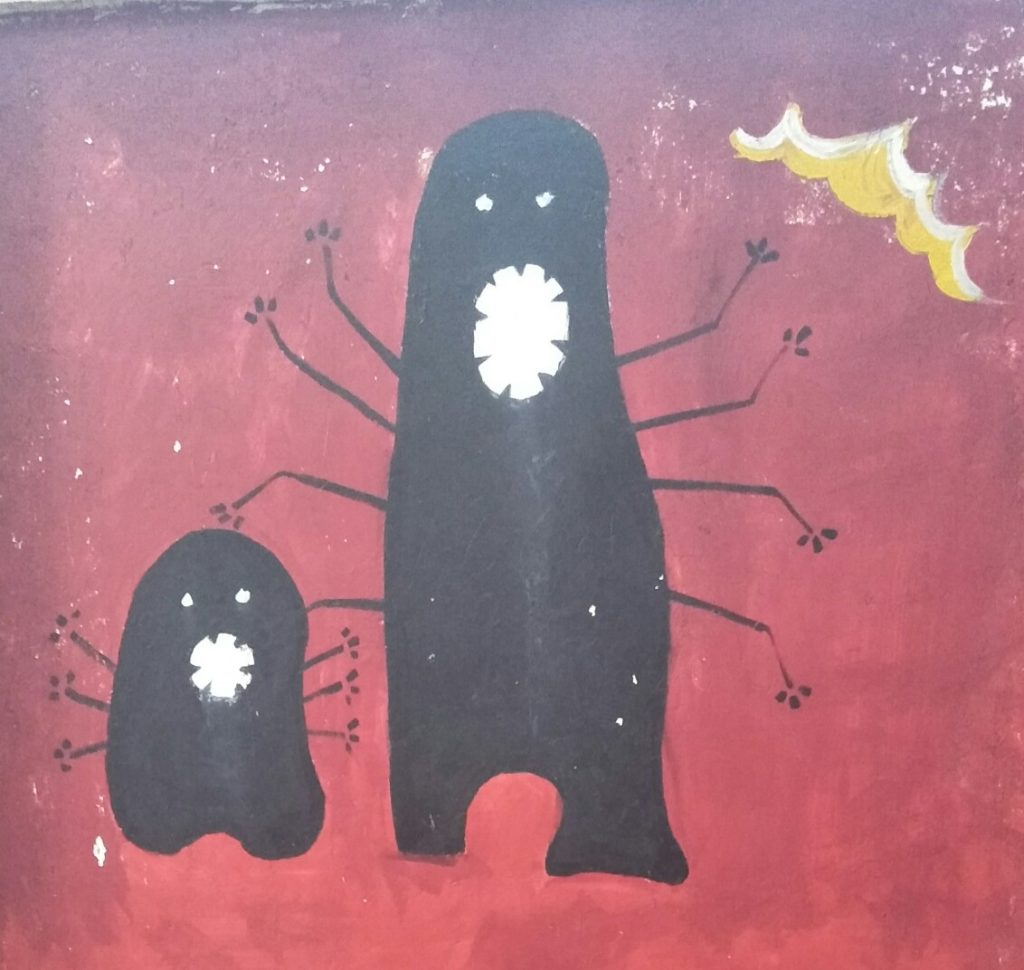 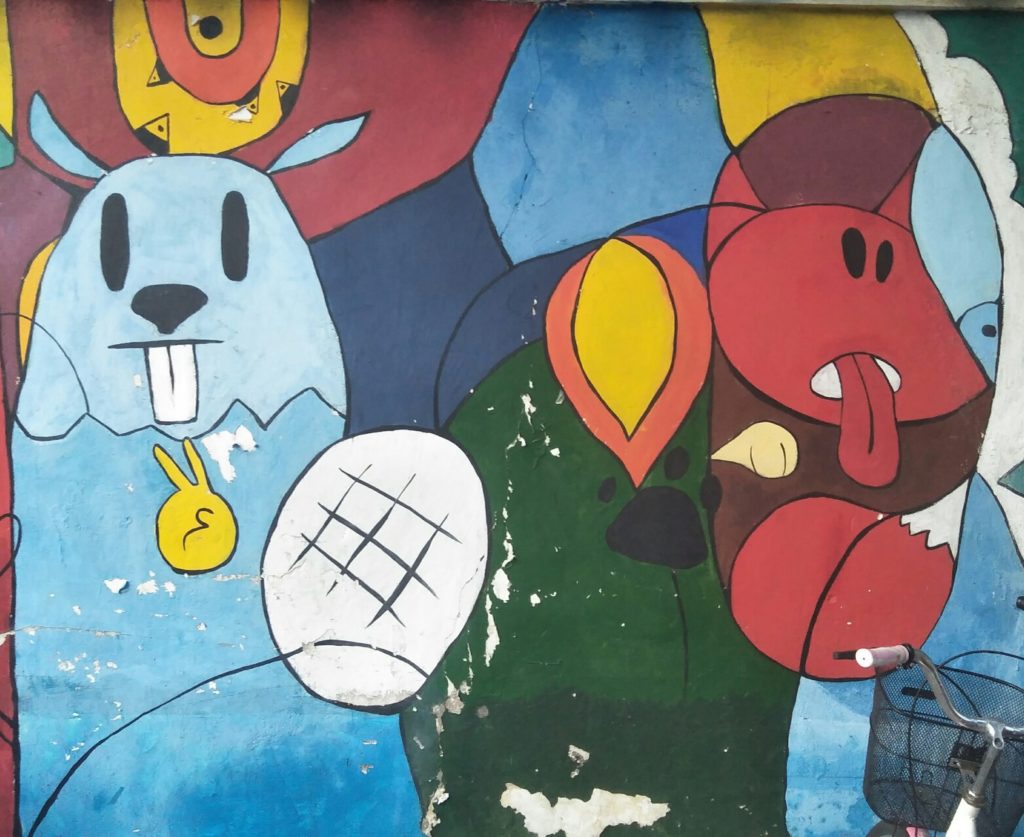 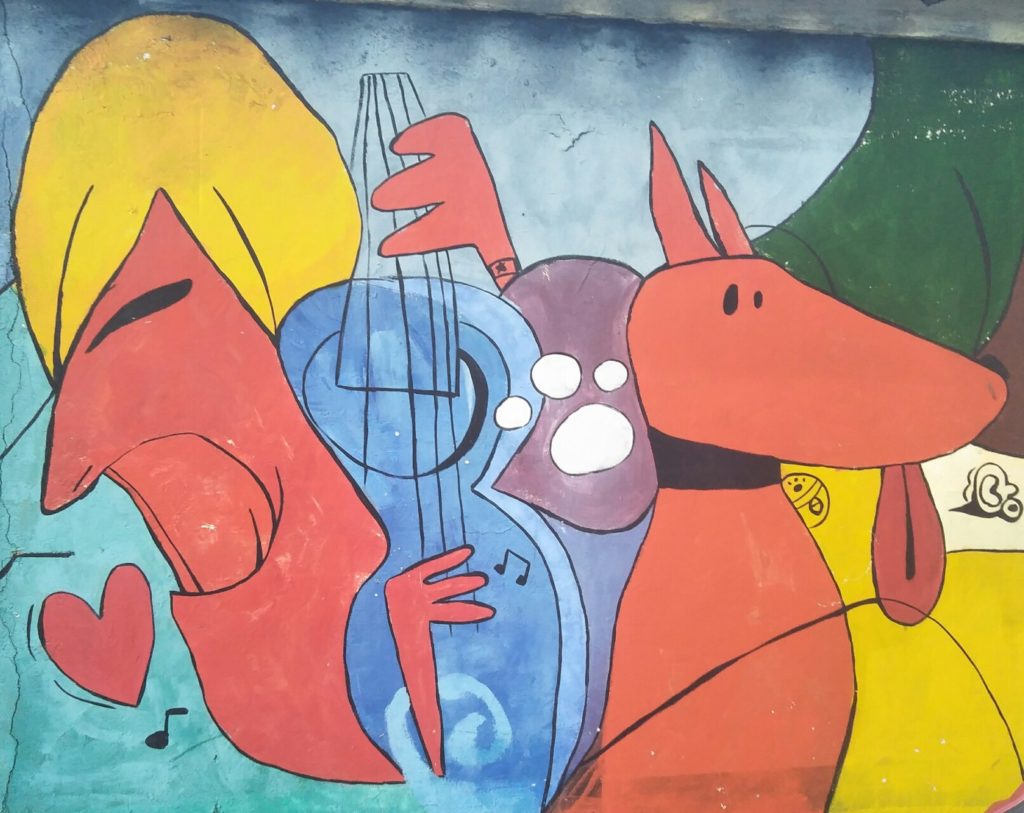 This is just three selections from a bigger personal photo archive I have. This was near Sanyang Plaza in downtown Wuxi — walking distance from the subway station and Chong’an Temple. I always found these murals quirky, whimsical, and fun to look at. Now, the area looks like this. 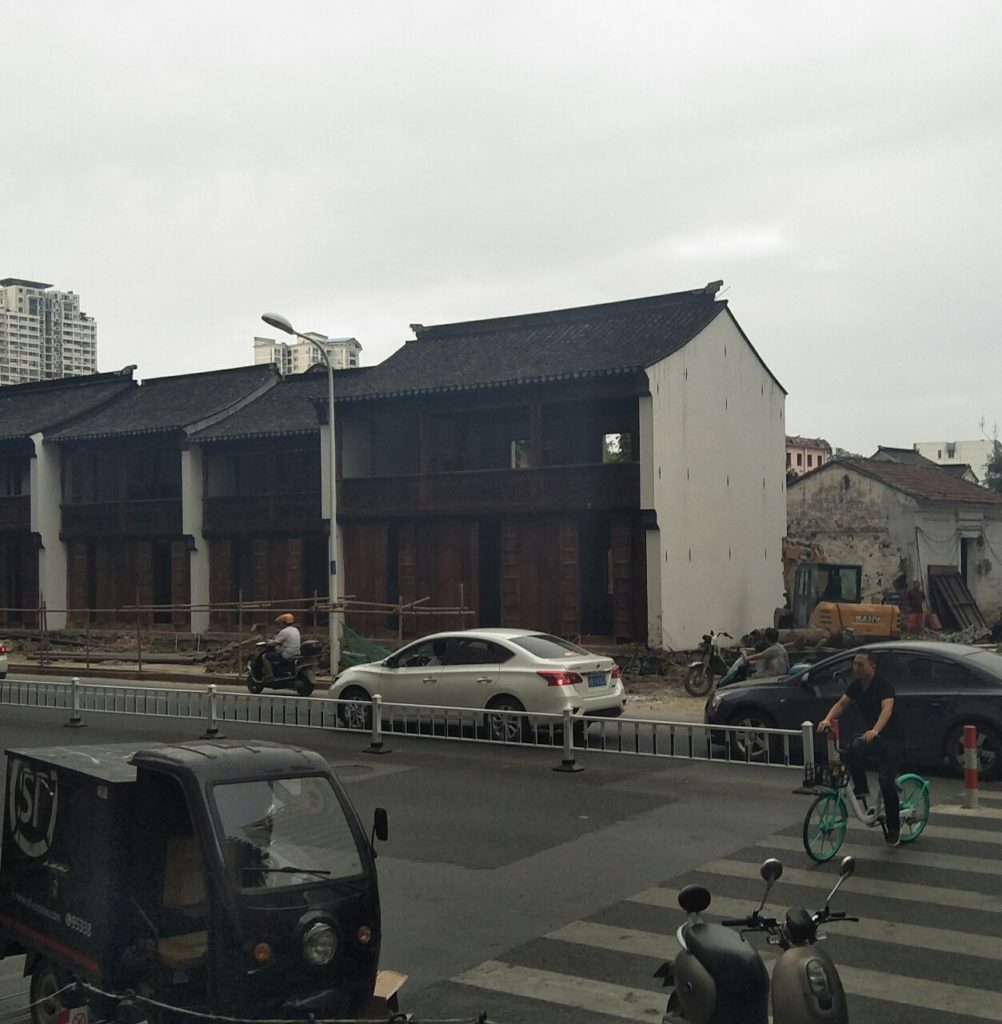 The graffiti wall is completely gone. It seems something with traditional architecture is taking its place. A similar situation has happened with another long mural wall across the street. 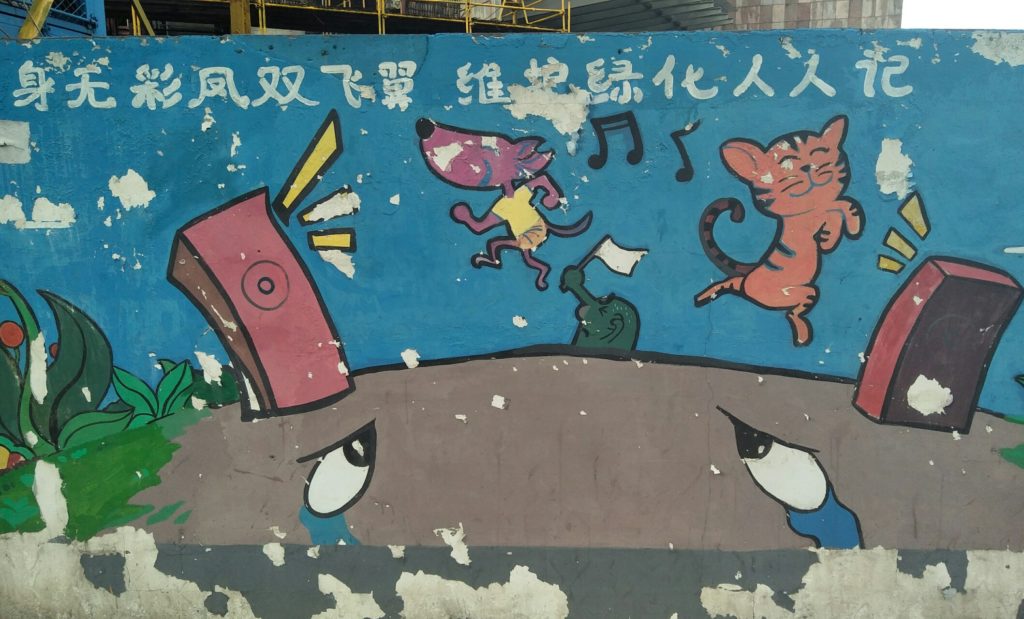 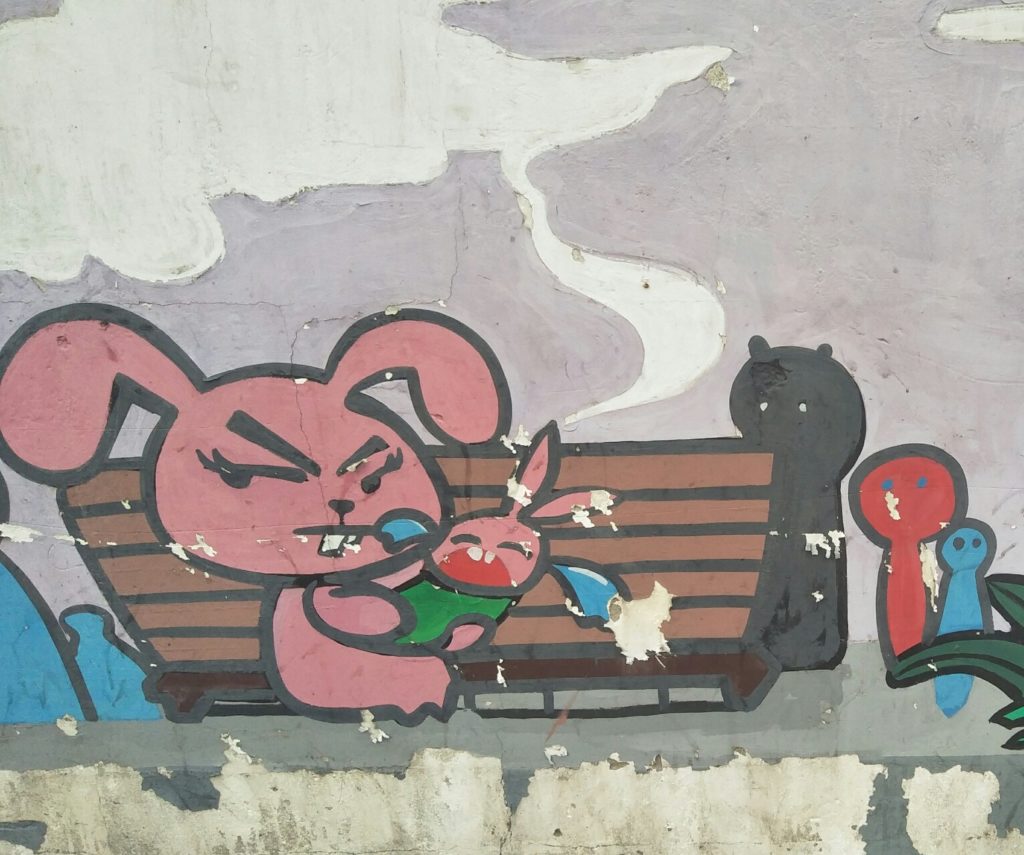 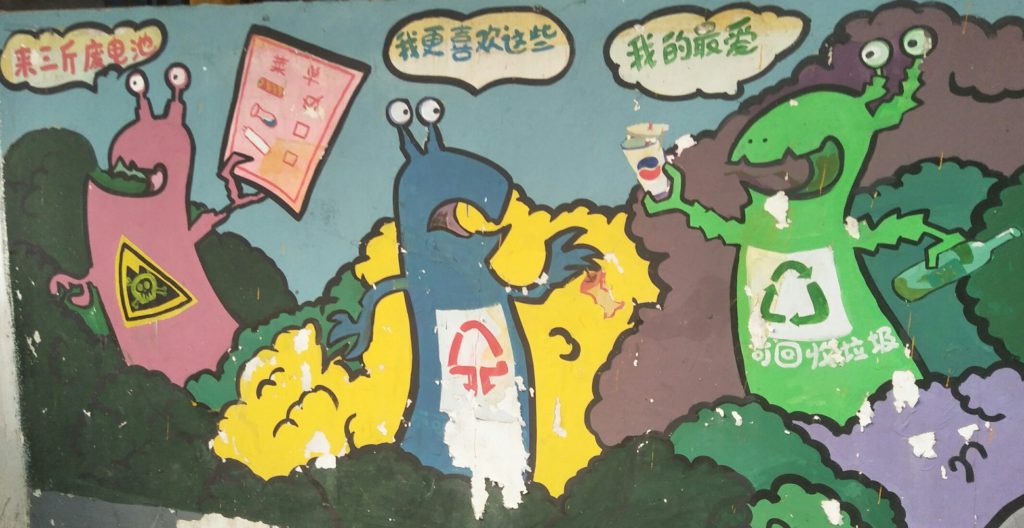 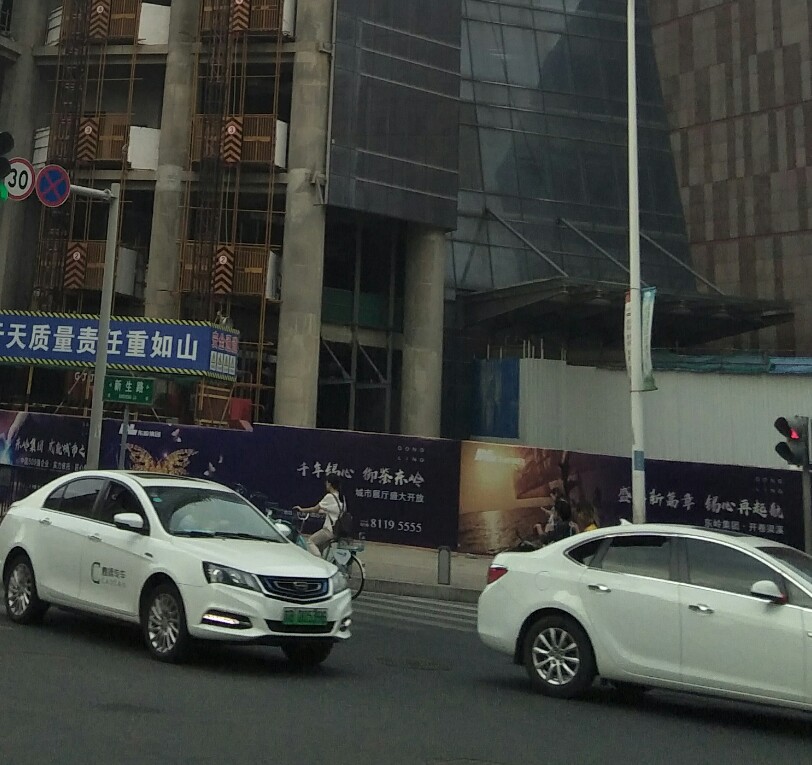 If you look closely, the artwork is now covered by advertisements. I am not complaining about this. I am not somebody who thinks every bit of artwork needs to physically preserved either. There are reasons why some American art lovers, like myself, always snap cell pictures of graffiti. It’s a finite experience. A city or real estate company may remove it, eventually — such as what has happened in Wuxi. In America, graffiti pieces are often covered by rival artists who hate each other. As I said, street art can be a finite experience. So, to that, I am glad to enjoy both mural walls while I could.

“Why do Americans eat potatoes with nearly everything? It’s not right!” A Chinese teaching colleague blinked at me a few times. “I mean, when I lived in the US, I grew to hate potatoes at first and never wanted to look at them again. Eventually, I realized I had no choice and just learned to like them.”

I smiled. “First, I don’t know why. Second, a question. Why do lots of Chinese people always eat rice with their meals?”

This conversation happened many years ago. I lived in Wujin at the time. There is, however, a reason why I still remember this exchange. When a person is actively trying to assimilate into a foreign culture, two of the most immediate challenges are language and food. My colleague essentially was saying “I had to learn to like potatoes if I ever was to appreciate American food.” There is something similar that occurs to some westerners when they move to China. Some might find a few Chinese dishes culturally offensive due to organ meat and animal parts they are not used to. To appreciate Chinese food, sometimes, one has to turn these cultural sensitivities off.

I recently did this when some Chinese friends invited me out to lunch. They had a “free” coupon for a place called 就犟才好 jiù jiàng cái hǎo. It’s relatively new and on one of the upper levels of Injoy / Wuyue Plaza downtown. Actually, it may be occupying the space that used to be home to Summer and then a Vietnamese pho noodle shop. Alright then, so it’s new. What’s the culturally challenging part? It specializes 毛血旺 máo xuè wàng. Also, I quickly learned that when you feed those three characters in Baidu Translate, you get some hilarious Chinglish.

No, mao xue wang is not hairy blood. No strand, root, or follicle of hair is involved! This is one of those instances where it’s best to write the name in Pinyin without tone markers and call that the dish’s English name. Okay, so what is it?

It’s a soup originally from Chongqing. Oh, and by the way, it’s extremely spicy. The above photo was taken from a soup that had been intentionally toned down at my request. So, instead of “extremely spicy,” it was just “very, very spicy.” I can’t imagine how mao xue wang in it’s natural, highly nuclear state would make me weep and sob with each bite. Spicy red peppers are not culturally challenging. What is? The two signature ingredients.

Tripe! This is hardly the first time I have eaten animal stomach. That is just merely the cost of living in China for years and trying to make friends with the locals. However, I have always struggled on how to describe tripe’s flavor. So, I consulted a fellow foodie — who is a rather intrepid and fearless gastronaut (inside joke). He said, “I don’t know. Tripe has always been more about its chewy texture than it’s flavor.” Right, he is. So, what’s the other challenging ingredient in mao xue wang?

Blood! Congealed blood shows up in a lot of Chinese cuisine. Once you get past the very American icky ick ick gross! factor, it basically tastes like a slightly metalic tofu. One of the greater things about mao xue wang is the other ingredients. This soup can be customized, but it typically also has seafood in it.

You can find shrimp, squid, fish, vegetables floating or submerged in this soup. So, if you are out to lunch with Chinese friends, and you don’t want to eat blood and guts, simply pick out the stuff you do like. This restaurant offers a variety of side dishes. One of those was very welcome to my inner American.

Cheesy potatoes! Oh, what a comfort food and an emotional crutch while eating adventuresome! At any rate, did I enjoy the totality of my lunch at 就犟才好 jiù jiàng cái hǎo? Yes. Would I eat there again? Also yes, but with one caveat. This is the sort of place that you share with other people. It’s not meant for solo dining. It’s more of a communal experience, and the restaurant itself caps tables at four people and no more than that.

While the place is relatively new, it has seemed to drawn a crowd. This might mean, depending on when you visit, there could be a bit of a wait to be seated.