When I raised the sandwich to my mouth,  it fell apart into a disgusting pile of steak, mayonnaise, corn kernels, and more. I glared at the mess on my plate.  I tried to quell my mounting rage, because — well — sane people don’t lose their minds over hoagies. Also, I shouldn’t have gotten so excited that a new sandwich place opened at Xinbei Wanda Plaza. I set myself up for disappointment.  In the end, I told myself that this is normal for a Chinese city like Changzhou.  The Dragon City is not Manhattan, Brooklyn, or New Jersey. Jewish delis do not exist here.

One does, however, exist in Shanghai, and to say it’s awesome is an understatement. They smoke their own meat and make their own pastrami. In Canada, this would be called “Montreal smoked meat,” but it’s essentially the same thing as pastrami. Montreal does have a legacy of Jewish immigration that also brought kosher deli traditions, and that’s what gives Tock’s — on the other side of the world in China — unique character.

Obviously, the pastrami is the signature menu item, here. It’s featured a few different sandwiches and platters. There are three versions of this cured and brined beef, too, and the differences depend on how much fat you are willing to consume. So, there is a lean, a medium, and a fatty version that you can specify. The times I have eaten there, the waitstaff have always recommended “medium” as the most popular among regular customers. That’s what I had, and it was just perfect, and pastrami really is my favorite lunch meat of all time.  It’s one of the few thing I actually miss about living in New Jersey. I guess you can say that’s also why this deli really was “love at first bite” for me.

As for the two other specialties available, there is smoked duck and smoked chicken. The smoked duck is just glorious. The resulting sandwich was just meat and bread, but the flavor of the meat, piled high and served warm, could give Tock’s pastrami a run for it’s money. While very good, the duck here will always come in second, however. 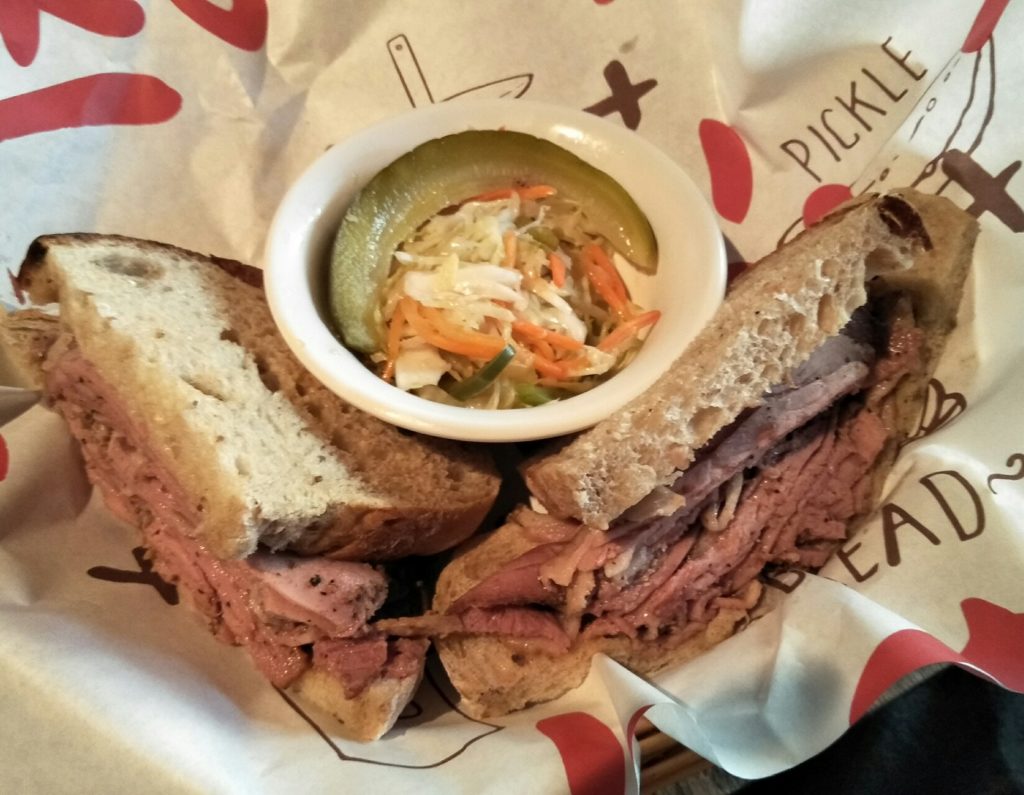 The smoked chicken is in a distant third. Don’t get me wrong. It’s good, but it just does not have the strong, distinctive flavor of pastrami or duck. Tock’s has a menu option where you can have two different meats within one sandwich. It would be best to pair the chicken with the pastrami or the duck. Pairing the duck and the pastrami would be a bad idea, since you would have two unique, complex flavors clashing with each other. 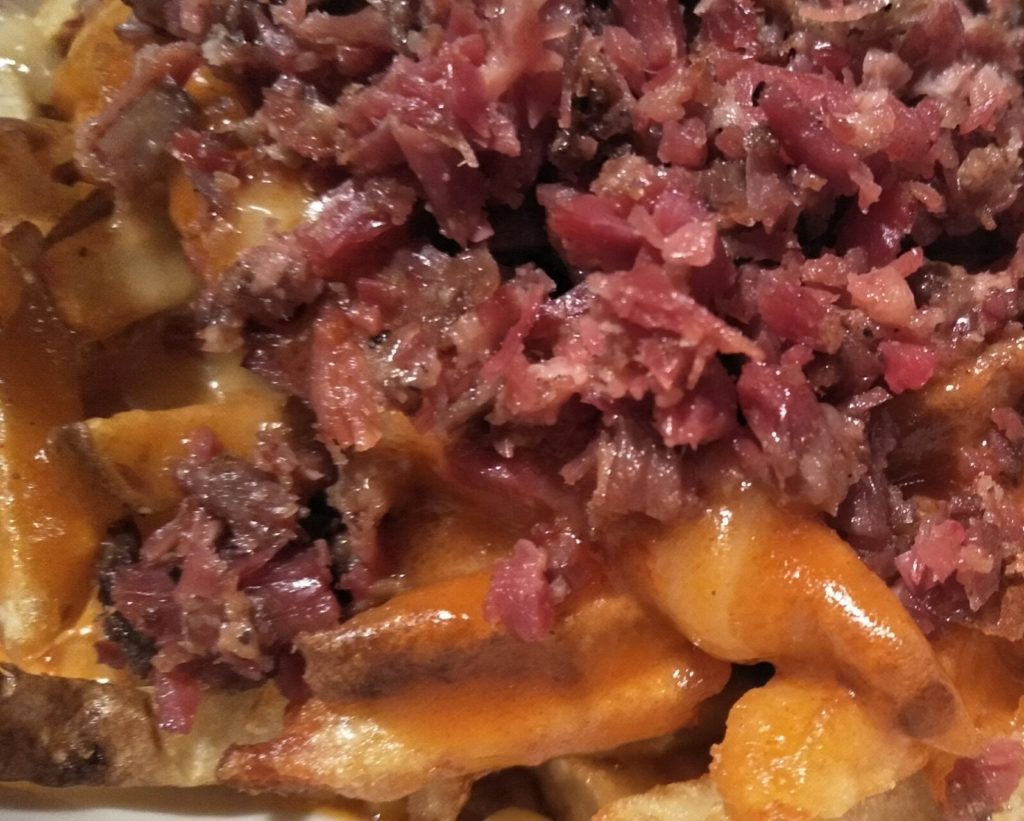 Tock’s also has poutine. This is a food nearly all my Canadian friends are passionate about. In other English languages cultures, we would call these “wet fries” — fried potatoes smothered with a topping. In that regard, I guess you could argue that “chili fries” would be an American version of poutine. In Canada, this delicious bit of junk food has gravy and cheese curds as basic toppings that could be built upon. Tock’s provides this, but they also have versions that include chopped smoked meat. You can either order a large portion of whatever poutine preference, or you can pay extra and have your side of fries jazzed up beside your sandwich. 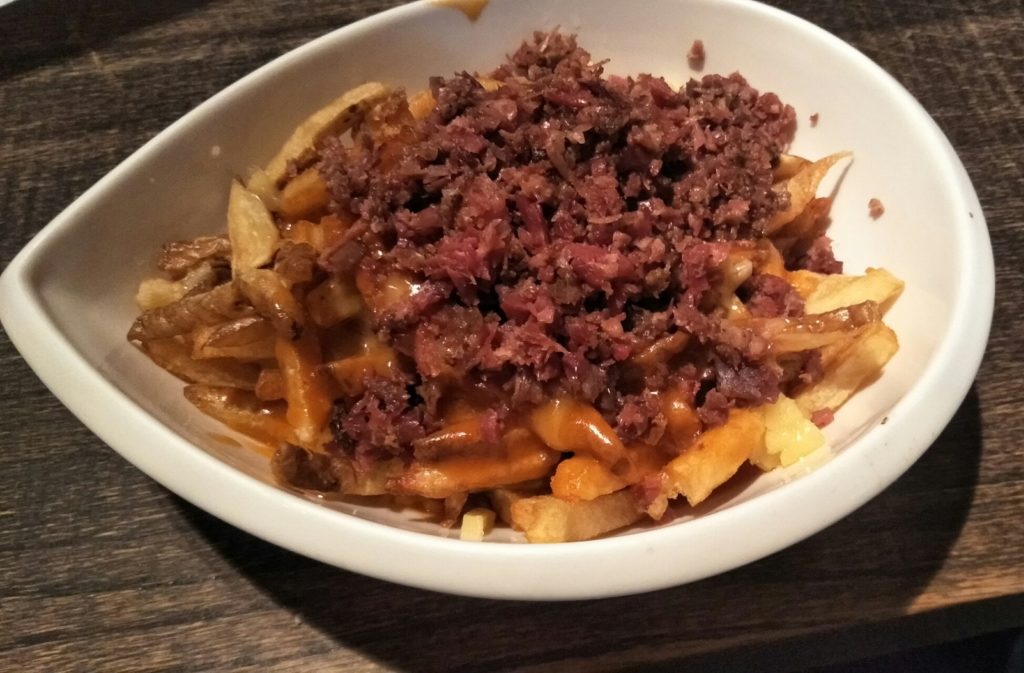 I have always left Tock’s stuffed and satisfied. Every time I go there, or some of the other great food places in Shanghai, it gives me the patience to persevere through some of the more blundering attempts you might find in Changzhou start-up sandwich places. That’s not to say Changzhou is bad; I live here and it’s my point of reference. You can find similar experiences in other smaller-sized Chinese cities. In short, Tock’s is absolutely worth a stop while you are visiting  Shanghai and conducting other business.

Tock’s Montreal Deli can be found in The Bund. It is walking distance from the East Nanjing Road subway station, which services Line 2 and Line 11.  It can be found on Henan Road. 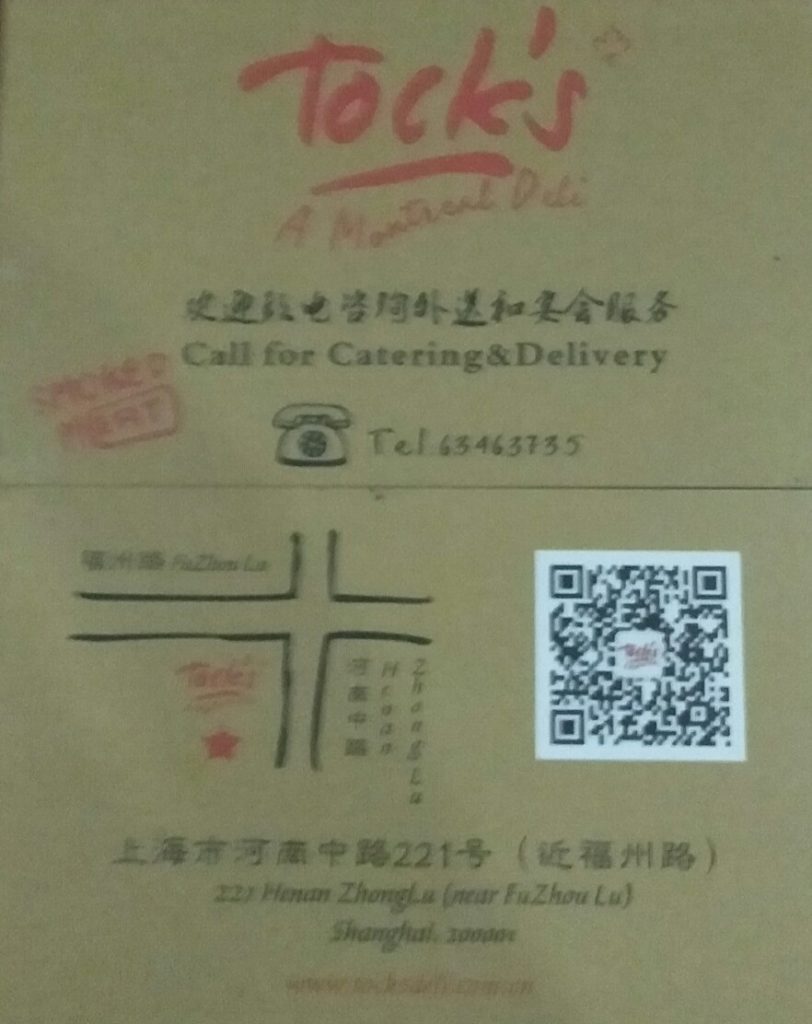