Extremely large and highly specialized markets are nothing new in China. There are some, however, that are just surreal, and 江苏省华东石材市场 jiāngsū shěng huádōng shícái shìchǎng, aka the Jiangsu East China Stone Market certainly fits the “surreal” description.

This is located in Yixing (Wuxi prefecture), but it’s essentially just over the city line with southern Changzhou. I first found this place years ago when I first took a bus to Yixing. However, since I was on an intercity express coach, there was never any chance to get off and walk around. Over the years, every time I bussed it to Yixing, I passed this place and my desire to explore grew more and more. Once I got my Chinese driver’s license, this stone market was in the top three of places I wanted to go. So, the question here is: why?

Nearly 80% of the area sells stuff like industrial marble slabs, but the more interesting stuff is along the road. That’s where the statues for sale are located. As somebody who loves art, I knew this area would be a fundamentally fun experience.

Museum and gallery exhibits are curated. Somebody has had a hand in selecting what goes where and next to what. That is not the same as a purely retail experience where there is absolutely no thought in how stuff is displayed. This can lead to purely chaotic, haphazard, and unintended juxtapositions.

For those who who may not know the term, a juxtaposition is a type of metaphorical comparison. Two things of unlike nature are placed together for contrasting effect. Think of editorial decisions involving newspaper layouts. One headline screams “Evangelical Pastor Pubically Cries While Admitting Hooker Addiction.” The story next to it is titled “Hurricane Floods Sends Hog Waste into Drinking Water.” One could accuse me of being sarcastic, but I actually saw this once when I lived in North Carolina. Trust me, the decision to put the stories next to each other is not an accident.

The wonder of wandering around a place like this, with a camera or a mobile phone, are the dramatic pairings that one can find.

Like Mao Zedong and Guanyin, the goddess of mercy.

Here, a crucified Jesus is hanging out with Buddha. Is one blessing the other?

Here there is Charles Darwin, who postulated the theory of evolution and survival of the fittest. His neighbor is CPC model worker and folk hero Lei Feng — who died in 1962 when a telephone pole accidentally fell on him.

As wild as a juxtaposition that would be, it wasn’t the silliest. That would be Guanyin flanked by demonic versions of Mickey and Minney Mouse.

This is one that I just can’t unpack. I prefer the mystery of it.

There are only seven different stories, and everything else is either a blending or a variation on those types.

If you have ever studied literature, you would have likely heard this idea at some point. For me, it was also kind of hard to nail down the exact origin of this, because I have heard countless professors and teachers spin it. For example:

There are only ten original stories, and they all come from The Bard!

Obviously, that came from one of my Shakespeare professors back in my undergraduate days. Some say that the idea comes from Christopher Booker and his tome The Seven Basic Plots: Why We Tell Stories.  At first glance, that idea doesn’t sit well with me. His book was first published in 2004, and that’s the year I finished my MFA in poetry.  So, obviously this idea has been floating around English departments long before that. 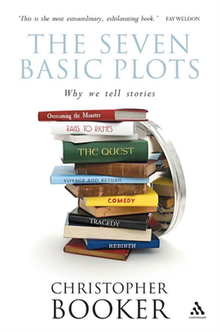 Where the idea originally comes from, or what version of it is being cited, in a sense ultimately doesn’t matter. Part of the idea is essentially true, as one can find stories from different cultures that have similar arcs.  Romeo and Juliet, for example, is essentially a tale of two teenage lovers that are kept apart by their families, and that ends tragically in a double suicide. Any tragic romance is ultimately compared to that story — if you come from a western culture.

China, on the other hand, has tales that predate Shakespeare and western culture in general by many centuries to a thousand or so years. Take, for instance, The Butterfly Lovers. It’s considered one of the four greatest folktales in Chinese culture. Like Romeo and Juliet, it’s about a girl and a guy who are kept apart by their families.  The story goes like this.

Zhu Yingtai wants an education. However, it’s not common for women of the time period. Regardless, she persuades her father to allow it. However, to do so, she must cross dress as a man. During three years of study, she falls in love with her classmate, Liang Shanbo. He does not catch on at first, so Zhu insists that she play the role of matchmaker so Liang can marry her “sister.” However,  Zhu is the only girl in a family of nine total children.  It’s just a ruse to come out to him. Eventually, when all is revealed, they swear a “till death parts us” oath.  However,  Zhu’s father had already arranged a marriage for her to the son a wealthy businessman. Zhu is basically torn away from Liang, and he withers and dies with a profoundly broken heart. When Zhu visits his grave, she becomes filled with absolute despair. She begs his grave to open up. It does. She flings herself in and also dies. Then, both of their spirits rise in the form of colorful butterflies. They fly off  to spend the rest of eternity together. 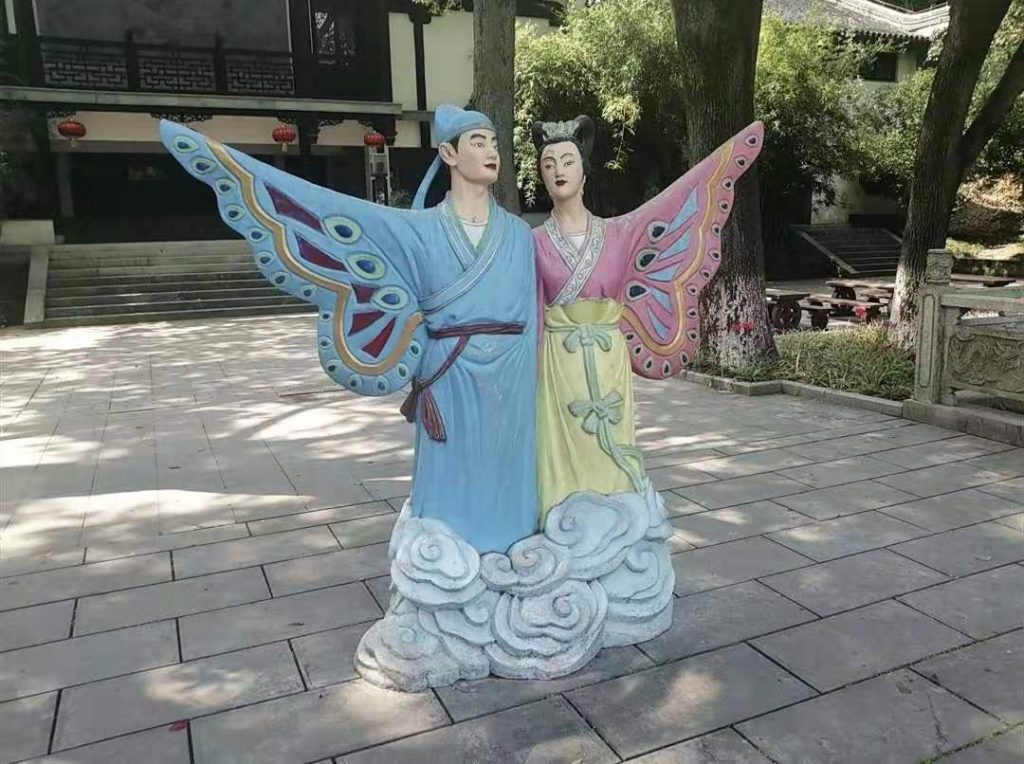 The first recorded instance of this dates back to the Tang Dynasty –long before Shakespeare ever put ink and quill to paper. The other thing is this, and this happens anywhere, any country legends exist. Many different locations claim to the original “home” of the story. Liang Shanbo, for example, is said to be from Ningbo, where there is a temple dedicated to him.

The Wuxi county-level city  of Yixing also claims to be part of this story.  Essentially, Yixing clams to be where Zhu once studied. This has been worked into one of the town’s higher-profile tourist attractions, Shanjuan Cave. It should be noted that this legend is not the whole story of the cave — just a part. Once one sees the cavern, a garden / courtyard dubbed Yingtai Academy is next. This is essentially near the exit and a cable car station. 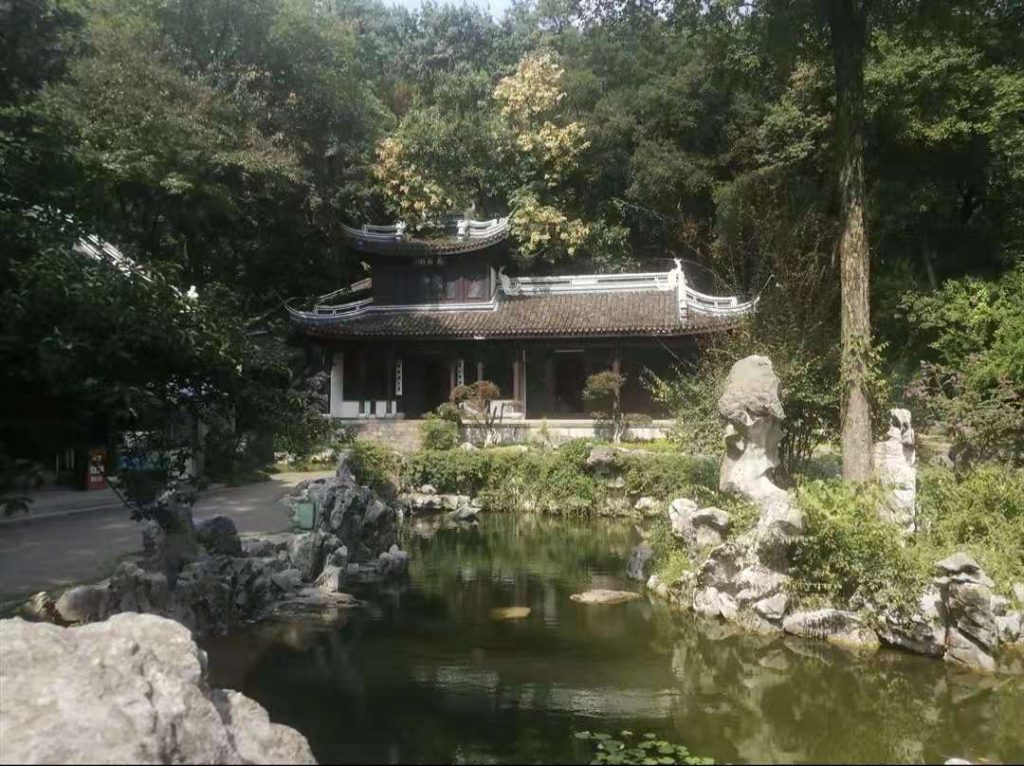 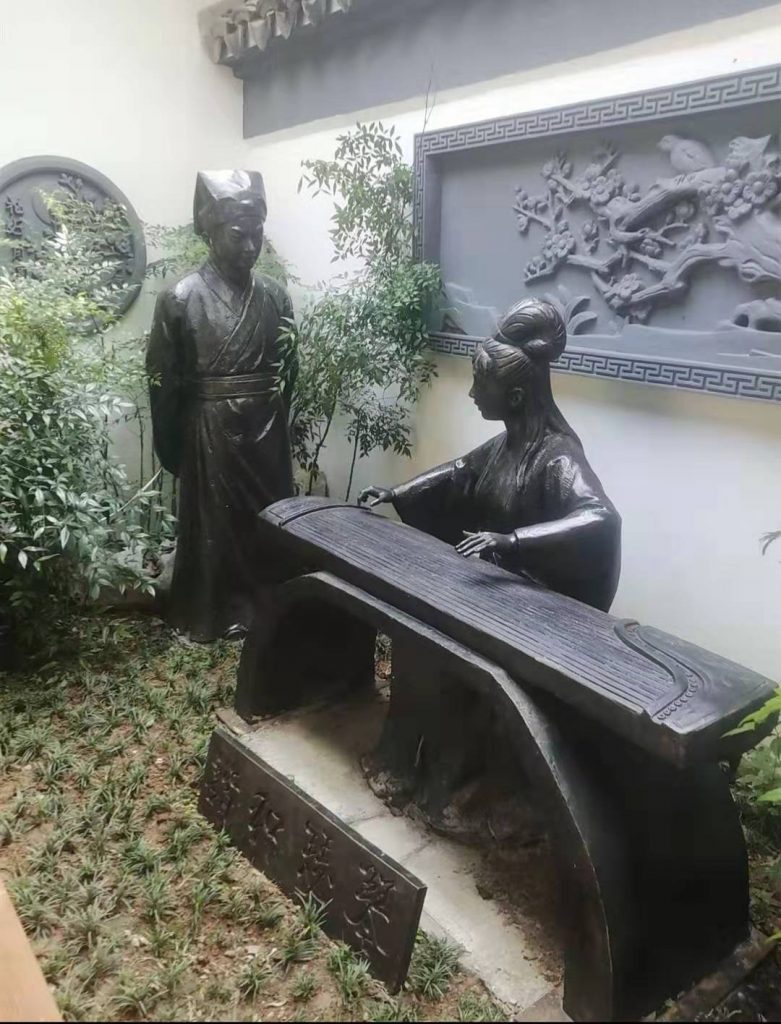 This is just but one reason to see this particular place in Yixing. As of this writing, I have been here twice. I recently went back because all of my photos of Shanjuan were on a cell phone that was eventually stolen. I hadn’t backed them up. During this more recent visit, the cable cars to the top of the mountain were not working. Eventually, I may go to Shanjuan again to do that — so I can finally claim that I have seen everything the place has to offer. 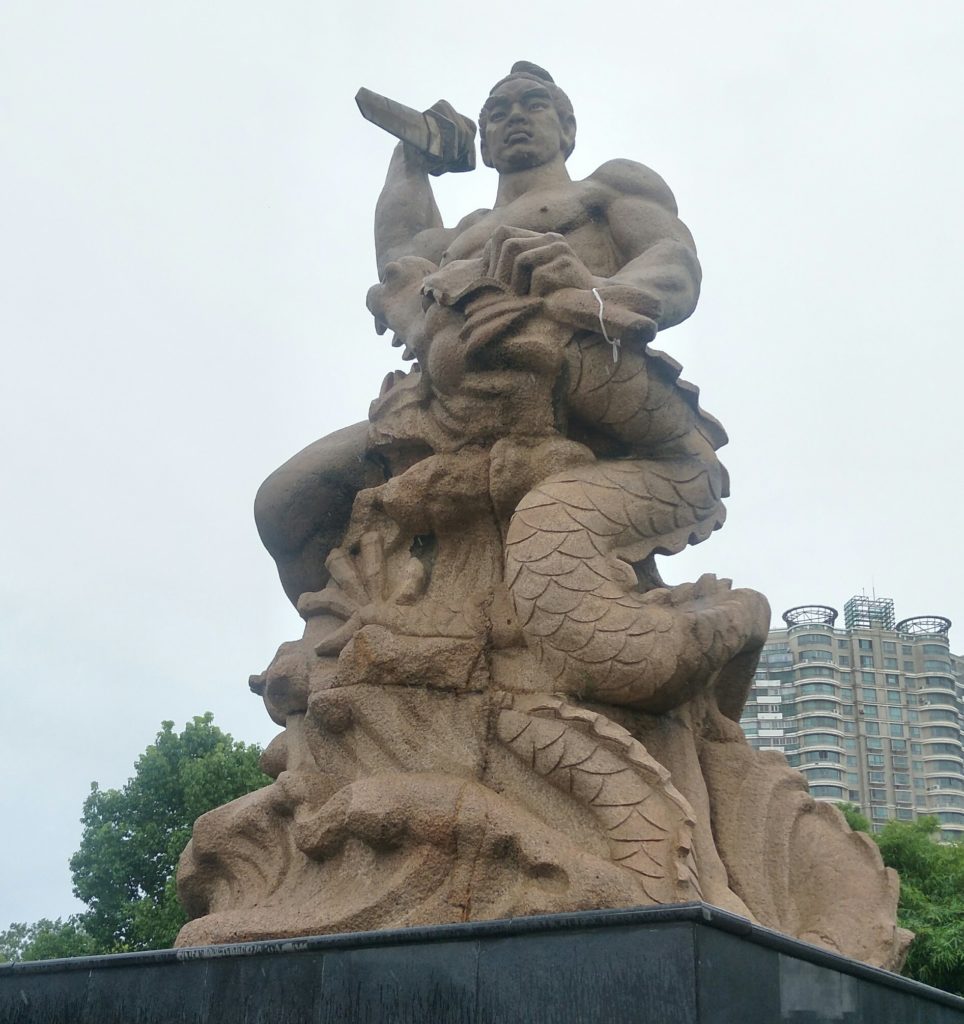 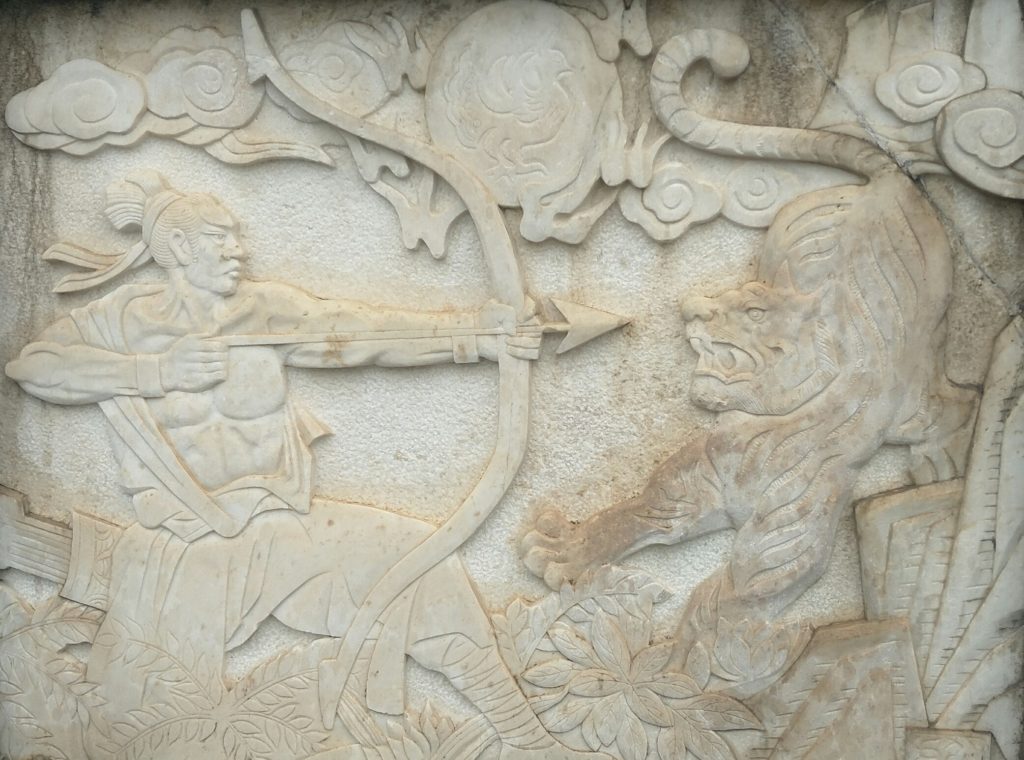 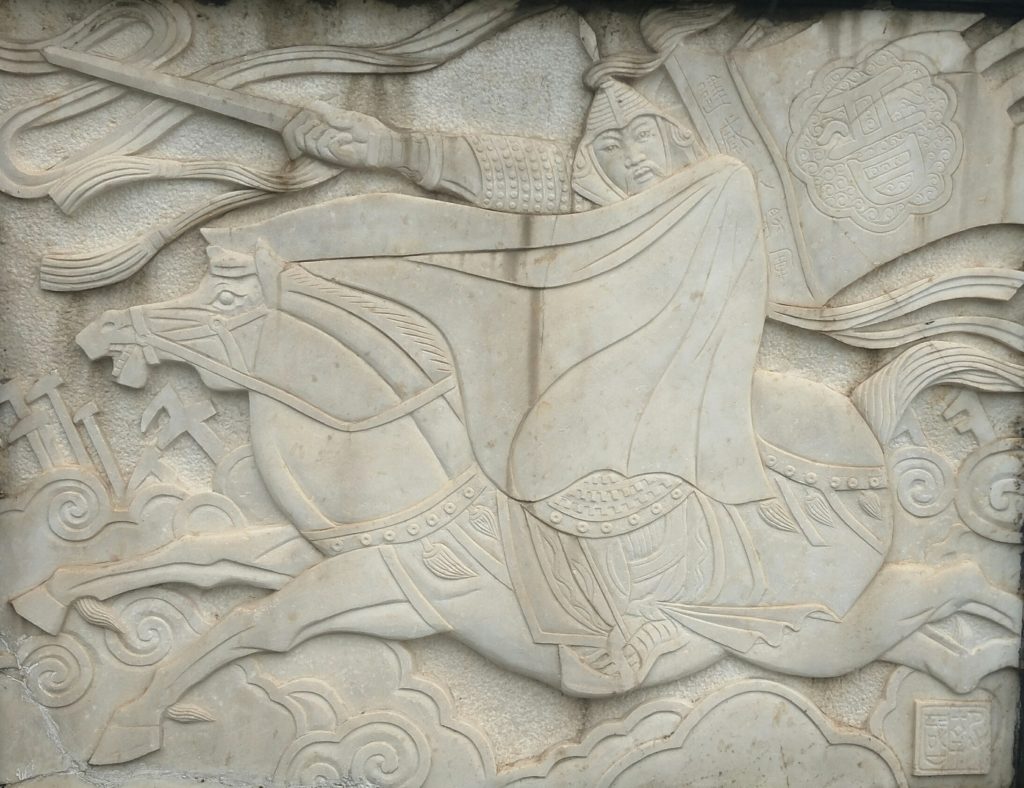